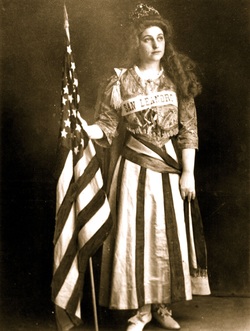 Lottie Best, Miss San Leandro
People have been here for thousands of years. The area we now call San Leandro is in the traditional Halkin (Jalquin) homeland of the Chochenyo and the Bay Mewuk Ohlone people.  This land has been settled, nurtured, and loved since time immemorial by the Halkin people. Because of the strength and determination of their ancestors and elders, the Halkin people continue to live and thrive in San Leandro and the surrounding area. We recognize their deep and living presence, and we are grateful for the opportunity to gather and live on this beautiful land.  We urge support for the federal recognition of the Ohlone people.

The town of San Leandro began less than two centuries ago, when people from all over the world found their way to California in the 1850s in search of gold. Some of those newcomers squatted on the land of the Spanish Californios then living in the East Bay.

Geese and ducks attracted the first squatters to Rancho San Leandro. José Joaquin Estudillo's cattle ranch on the plain between San Francisco Bay and the East Bay hills had plentiful game, land seemingly for the taking, and a central location. San Leandro Creek, San Lorenzo Creek, and springs provided water. Squatter Thomas Mulford and many other Forty-niners arriving during the Gold Rush ignored the title claims of the Spanish, who had lived here for decades. Hunting wildfowl on Estudillo's land to sell in San Francisco, Mulford made enough money to build a bay landing and launch a freighting business, start a farm, develop a lucrative oyster fishery, and many decades later, die a millionaire in San Leandro. By the time Mulford died, Estudillo's ranch had been transformed into an American town.

Before the squatters arrived, the Spanish had developed cattle ranches where the Indigenous people had hunted and gathered in grasslands and oak forests. People who came after the squatters would replace cherry orchards and rhubarb fields with factories, suburban housing, and freeways. Ohlone village, Spanish rancho, Squatterville, the Portuguese Capital of the West, the Cherry City, the City of Sunshine and Flowers, the Center of Industry—the area that is now San Leandro has had many identities. The people who created those communities took advantage of the bountiful resources, mild climate, and excellent location with bay access that would then attract new people, who created new communities.

The first people reached San Francisco Bay thousands of years ago. They found acorns, seeds, roots, fish, and shellfish.  Flocks of birds filled the sky and marshes. Grizzly bears, elk, antelope, and small game were plentiful. The Jalquin and Yrgin people who lived in the San Leandro area were two of the approximately 40 tribal groups referred to today collectively as the Ohlone. They developed an extensive and intimate knowledge of their environment, and they used controlled burns and other techniques to increase yields of plants and animals. A complex spiritual understanding of their world defined their relationship to each other and to the flora, fauna and characteristics of their territory.

Capt. Pedro Fages led a small expedition from Monterey through the East Bay in 1771, which was the first Spanish contact with the Jalquin and Yrgin. Spain decided to establish a presence in California (a colony she had claimed but ignored since 1542) beginning with Fr. Junípero Serra's Sacred Expedition in 1769.  The Spanish newcomers were seeking souls, and they wanted to settle Alta (upper) California to keep it from other colonial empires. During the next several decades, 21 missions and a handful of presidios and pueblos were established near the California coast. Spanish colonization had  devastating consequences for the Ohlone.

The Californios (Spanish colonists and their descendants) who settled in the area that would become San Leandro found grasslands, coastal access, and a climate that allowed them to raise thousands of cattle for hides and tallow, which were traded for goods brought by ship from the United States and elsewhere. Spanish and then, after Mexico's independence, Mexican colonial governors of California gave great tracts of land to settlers. The town of San Leandro developed over two of these land grants. Luís Maria Peralta's Rancho San Antonio stretched from San Leandro Creek north to El Cerrito Creek. José Joaquin Estudillo was given the area from San Leandro Creek south to San Lorenzo Creek. San Leandro gets its name from Estudillo's Rancho San Leandro, which in turn took its name from El Rodeo de San Leandro, Mission San José's cattle round up area (named for Saint Leander, a sixth-century Spanish bishop). Beginning with Mission San José herds in 1797, thousands of cattle roamed the East Bay and were tended by Ohlone and Mexican vaqueros (cowboys).

Mexico ceded California to the United States in 1848 after the Mexican-American War. Any chance for a leisurely transition from Mexican ranching to American farms and towns was lost when the world rushed in after the discovery of gold in the same year. Thomas Mulford and his partners began the incursion onto Estudillo's land, but there were soon so many squatters along San Lorenzo Creek that the area was called Squatterville. The squatters, like the native people and the Spanish, found that plentiful game, land, and a golden climate suited their needs. Despite significant financial losses fighting in American courts to confirm their land titles, the Estudillos and Peraltas and their descendants were active participants in the new town.

As the town grew, it gained regional importance from its central location. For a brief period, San Leandro won the political tug-of-war between towns that wanted to be the seat of Alameda County. As the county seat from 1855 to 1873, San Leandro was the bustling center of East Bay politics. After the county seat was transferred to Oakland, San Leandro veered onto a quieter path.

Farmers discovered that they could grow almost anything on San Leandro's fertile flatlands, while bay access and early railroads provided the means to ship produce to markets far away. Dairy farms, chicken ranches, wheat fields, and acres of vegetables flourished, but orchards covered much of the land. In 1909, to celebrate a bumper crop of cherries, the town decided to hold a cherry festival, which established San Leandro as the Cherry City. Cherry festivals have been held off and on ever since.

California farmers needed agricultural equipment for heavy clay soil and vast acreages. Industrialists arrived in San Leandro in the late 19th century to meet that need. San Leandro had factories producing tractors, combines, hay presses, and other farm equipment, as well as a cannery to preserve local produce, by the late 1800s. Still, San Leandro remained a farming community and the Cherry City until floriculture began to replace farm fields and the town began to call itself the City of Sunshine and Flowers in the 1930s.

World War II military industries in the Bay Area offered employment to people still suffering the effects of the Great Depression. During the war years, thousands immigrated here from across America. The population continued to swell in the 1950s and 1960s. Many farm fields were sold to developers, who built housing for those new arrivals. Annexation of surrounding fields for industrial development, coupled with multiplying subdivisions, completed the transition from orchards to suburb. San Leandro left behind the "sunshine-and-flowers" identity and began billing itself as the "City of Industry".

At first, the opportunities to take part in this expanding suburb were not equally extended. Housing discrimination excluded African-Americans, Asian Americans, Hispanics, and Latinos. Once California's Rumford Fair Housing Act was able to take effect, San Leandro experienced its recent transformation into one of the most diverse cities in one of the most diverse states in the nation.

The elk and grizzlies, the vast cattle ranches, and the cherry orchards are gone. Today the land is covered mostly with housing for San Leandro's greatest resource—its people. Flowers blooming in the fertile soil of their yards, San Leandrans live between the sparkling bay and gentle hills, creating a new community to unite their many cultures and talents.